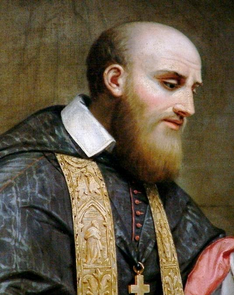 Francis de Sales (21 August 1567 – 28 December 1622) was a Bishop of Geneva and is revered as a saint in the Catholic Church. He became noted for his deep faith and his gentle approach to the religious divisions in his land resulting from the Protestant Reformation. He is known also, for his writings on the topic of spiritual direction and spiritual formation, particularly the Introduction to the Devout Life and the Treatise on the Love of God. Francis was born on 21 August 1567 in the family castle of Sales, in Thorens in the duchy of upper Savoy. He was the firstborn child of Francis and Frances De Boisy. His father was forty-four, and his mother fifteen. There were twelve children born to the family, five of whom died soon after their birth. Francis' studies were lengthy and were accomplished in three stages: college studies at la Roche and Annecy (where his priestly vocation was born); then at the Jesuit college in Paris; and finally at Padua, where in 1591 he obtained his doctorate in civil and canon law. During these years he also studied theology. At 35, he became bishop of Geneva. While administering his diocese he continued to preach, hear confessions, and catechize the children. His gentle character was a great asset in winning souls. He practiced his own axiom, “A spoonful of honey attracts more flies than a barrelful of vinegar.” He died in 1622 in Lyons at a convent he had helped to found. Francis de Sales was canonized in 1665 and named a Doctor of the Church in 1877. 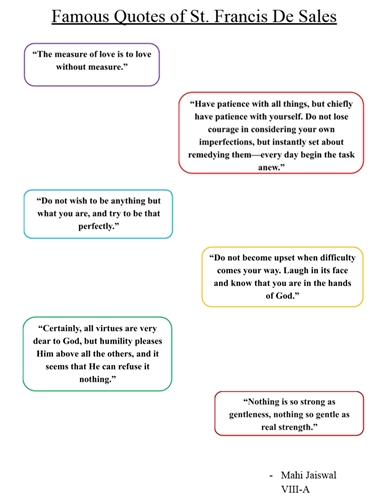 St. Francis de Sales was born to a noble family at Chateau de Sales in the Kingdom of Savoy near Geneva, Switzerland on August 21, 1567. He was a Bishop and Doctor of the Church.Francis was both intelligent and gentle. From a very early age, he desired to serve God. He knew for years he had a vocation to the priesthood, but kept it from his family. His father wanted him to enter a career in law and politics. All the time, he never lost his passion for God. He studied theology and practiced mental prayers, but kept quiet about his devotion. To please his father, he also studied fencing and riding.God made his will clear to Francis one day while he was riding. Francis fell from his horse three times that day. Every time he fell, the sword came out of the scabbard, and every time it came out, the sword and scabbard came to rest on the ground in the shape of the Christian cross.After much discussion and disagreement from his father, Francis was ordained to the priesthood and elected provost of the Diocese of Geneva, in 1593, by the Bishop of Geneva.He was equally known as a friend of the poor, a man of almost supernatural affability and understanding. As a missionary, preacher, educationalist, writer, humanist, and the Bishop of Geneva, Francis upheld universal sanctity for all categories of people. He made himself 'all to all' through his inspiring words and selfless service to fellowmen. His books An Introduction to the Devout Life and Treatise on the Love of God have ensured a singular position for him in French literature.He is known also for his writings on the topic of spiritual direction and spiritual formation, particularly the Introduction to the Devout Life and the Treatise on the Love of God.The Roman Catholic Church currently celebrates St. Francis de Sales' feast on the 24 January, the day of his burial in Annecy in 1624.