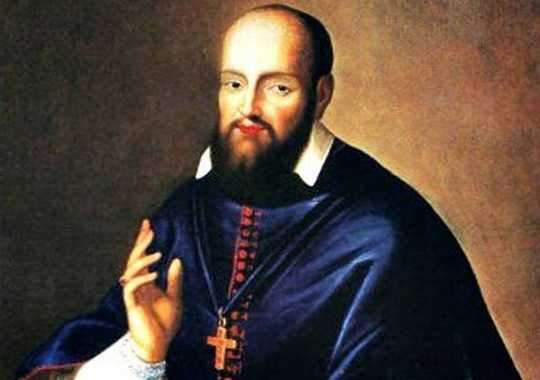 St. Francis de Sales, the heavenly patron of the Congregation of the Missionaries of St. Francis De Sales (MSFS) was born on the 21 August 1567. He had studied both law and theology. There he made up his mind about becoming a priest. He went through various changes and moved his heart to serve God rather than money or the world. In 1592, Sales ended his studies with the title of "Doctor", certified both in law and theology.

Bishop of Geneva, allowed him to seek ordination, after which he was given an appointment as provost of the cathedral chapter of Geneva in 1593. In 1602, Bishop Granier died, and Sales was consecrated Bishop of Geneva. During his years as bishop, Sales acquired a reputation as a spellbinding preacher and something of an ascetic. He was equally known as a friend of the poor, a man of almost supernatural affability and understanding. He was a notably clear and gracious stylist in French, Italian and Latin.

In December 1622 Sales was required to travel in the entourage of Charles Emmanuel I, Duke of Savoy. There he suffered a stroke, from which Sales died on the 28th of December, 1622. He was declared a Doctor of the Church by the Blessed Pope Pius IX in 1877.The Roman Catholic Church currently celebrates St. Francis de Sales' feast on the 24 January, the day of his burial in Annecy in 1624.

He is known as the Gentleman Saint. He is a Doctor of the Church and the patron of journalists everywhere. As a missionary, preacher, educationalist, writer, humanist, and the Bishop of Geneva, Francis upheld universal sanctity for all categories of people. He made himself 'all to all' through his inspiring words and selfless service to fellowmen. His books An Introduction to the Devout Life and Treatise on the Love of God have ensured a singular position for him in French literature.